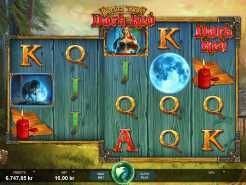 Play Now
Microgaming’s latest slot release is called Wicked Tales: Dark Red. This slot is nothing short of captivating as it reimagines a classic tale but adds a wicked twist. This is a five reel and 25 pay line fantasy slot game that takes place in the sinister forests of Ravenmire. Added features include Wandering Reels, which is three reels that spin together and contain Jumbo Blocks, increasing your chances of a big win. Other features include bonus symbols, cash prizes, multipliers, and the Wandering Reels Feature bonus game, the Forest of Fortunes Pick Bonus feature, and the Wolf’s Wheel Bonus feature. Play with coin values starting at a penny up to one dollar with a top bet allowed of $200 with 8 coins allowed per pay line. The top jackpot is 5,000 times your stake. This exhilarating slot game went live on September 26. Some of the symbols used in Wicked Tales: Dark Red include a Bag of Gold, a Candle and Letter, the Dark Red Logo, a Full Moon, a Man with Torch, a Pendant, Red Riding Hood, and the legendary Wolf. The high cards of a standard playing deck are also used. The Dark Red logo is the wild symbol and replaces all symbols except for the scatter. The scatter symbol is the Full Moon. Get three bonus Treasure Chest symbols in the game and trigger the Wolf’s Wheel Bonus, where you will have the chance to spin the wheel for cash prizes, multipliers and the treasure chest. In the Wandering Reels feature, there are groups of 3 reels that spin together. The Wandering Reels stop in 1 of 3 positions, first 3 reels, 3 middle reels or last 3 reels. These contain jumbo blocks for higher chances of winning. The Wolf’s Wheel Bonus feature is triggered when 3 full moon scatters appear on the reels. Here, you’re guaranteed to trigger another feature. You spin the wheel where you can win cash prizes of up to 20 times your stake. Landing on any high symbols during the wheel bonus activates the free spins round, where nine free spins are awarded. If you land on the treasure chest, you will trigger the Forest of Fortunes Pick Bonus feature. Here you make picks to win more cash prizes. After each prize, the multiplier increases by 1. The feature will end once you find all 10 cash prizes or if you find a stopper. You can also uncover the protection of an axe to stop the feature from ending. This feature offers a 10x multiplier.
Play Now